MURDER RUNS IN THE FAMILY 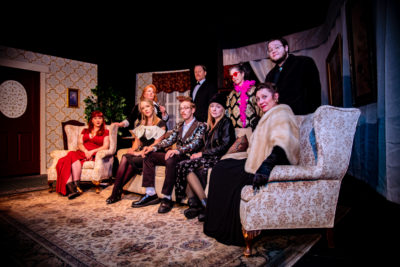 $10 Tickets can be purchased at the door or in advance at Barn Owl books.

The family patriarch, Bernard Pallfeather, has died under mysterious circumstances… a pipe has fallen on his chest covering up a bullet hole.

Who benefits? The wife and daughters of course, but then missing daughters, a stepsister, an aunt, and a cousin all show up for the reading of the will.

The stepsister is married to an ex-con. A daughter brings a private eye to find the murderer.

A lawyer brings all copies of the will to the residence, but family members keep trying to switch the wills out with ones that favor them.

Everyone carries a pistol.

There’s a thunderstorm and a flash flood.

And people start being murdered..but who is it?

Daniel Cope plays the secret detective Jack Sparks, whose identity is no secret to anyone. Kirsten Azoulay is the naïve daughter that truly wants to find the murderer. Rick Piper plays Montgomery, the butler that never smiles. Diane Penny is the dithering matron that plans to find the killer herself. Eddy Allen and Lexie Bryant are the ex-con and the man-hungry stepsister that seem most determined to switch wills. Madi Drake is the twin sisters Kathleen and Colleen Pallfeather-or is she? Jane Dykas, is ditzy Aunt Zelda, an old time hippy with red tennis shoes. Michelle Rentzsch plays cousin Maxine, who dresses like a vampire and is a Sumo wrestling expert. Jacob Keith is Burnett, the lawyer afraid of his own shadow. Autumn Herold is both a telegram messenger and a police officer. Collin Van Hoole runs the lights.