The Alpine Playhouse, a non-profit corporation, was started in 1966 by an ambitious group of McCall citizens who were interested in community theatre and bringing the performing arts to McCall. Jim Kelly directed the first production, Have a Heart, in a warehouse donated by Warren Brown and Don Luddington. Part of the building, which currently houses the 110-seat theatre in downtown McCall, was originally a Catholic church built in 1916. The building was purchased by the group in 1969, remodeled as a permanent home for the players and for two decades was the center of community theatre. Don and Jenny Luce, Mrs. Jack Saubert, Gladys Shelton, Helen Miller, Barry Binning, Martha Chitwood and Jane Brown were all people who played a big part in those formative years. 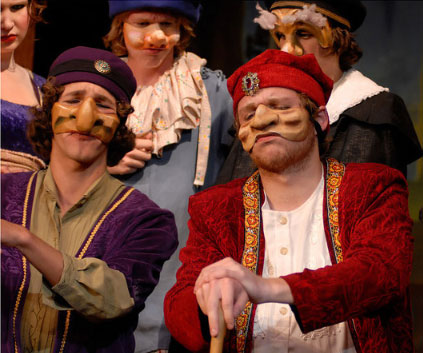 In 1983, the Alpine Playhouse was closed for structural repairs. Plays were reduced to one a year and performed at the school. In 1988, a fundraising effort was begun to remodel the Playhouse. With the help of grant funds received from the Idaho Commission for the Arts, private donations, and volunteer labor from the community, the Playhouse reopened with new risers and seating, upgraded lighting and sound systems, accessible bathrooms, and costume and storage space.

Through the years, the Playhouse has offered such varied productions as One Flew Over the Cuckoo’s Nest; The Fantastics; Lysistrata; Steel Magnolias; Major Barbara; We Won’t Pay! We Won’t Pay!; Juno and the Paycock; The Full Monty and How I Learned to Drive, as well as the popular Shakespeare in the Park productions.

Each June for the past eleven years, the Playhouse has co-sponsored the Seven Devils National Playwrights Conference, bringing in playwrights and directors from all over the United States.

The Playhouse is also used by local high schools for productions, as well as other organizations in the community to sponsor educational events. Our goal, as it has been since 1966, is to provide a home for the performing arts — a place where we can meet together to create, challenge, inspire and entertain each other.